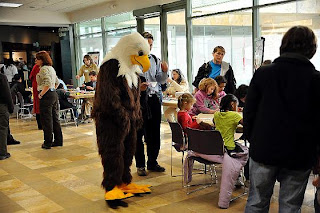 Take your family to the Patuxent Research Refuge this Saturday, March 12 to celebrate the birthday of the National Wildlife Refuge System.

It's impolite to ask what birthday, but I'll tell you that the National Wildlife Refuge has now been around for 108 years! Here are some fun facts:

(Those fun facts and more can be found at www.fws.gov/refuges)

They'll be ringing in 108 years young with activites, crafts and live animals (performances by Reptile World!)--all free. Bring some money to enjoy the first guided tram tours of the seaon and, of course, food.

Original post by Out by Ten. Thanks for reading!
Posted by Aimee @ Smiling Mama at 1:50 PM