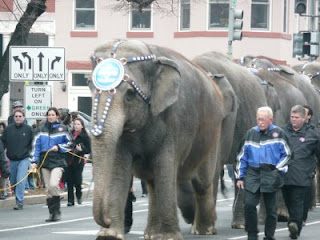 The circus is coming to town! Did you ever stop to think about how they get those big animals from the trains to the venue? They walk them right through town!

Last year I took Lucas into DC to watch the elephant parade. It was a very fun, free way to enjoy the elephants (and clowns and a few other animals) in a unique way. Unfortunately, in an attempt to avoid the crowd that had gathered on one side of the street, we got the back end of their little show.

That big one on the right did give us just the kind of show a 3 year old boy would love. Ahem.

You can catch the Pachyderm Parade this Tuesday, March 16. The parade is tentatively scheduled to begin at 1pm.

The walk will start at Virginia Avenue, SE then will head Northwest on Washington Avenue, SW. It will then head West on Independence Avenue, SW, past the Congressional Office Buildings and the Capitol. They'll turn North on 3rd Street, SW and continue on 3rd Street NW before heading West on G Street, NW. Finally, they will go North on 6th Street, NW and into the loading dock at the Verizon Center.

Organizers are encouraging press to be at 3rd Street between Jefferson Drive, SW and Madison Drive, NW at approximately 1:20pm. That's the West front of the Capitol Building. My guess is that this is where you'll want to be as well, to catch a little show. The Federal Center SW Metro stop is the closest stop to this location.

Another option, if you want to take the Metro, is to get off at Judiciary Square and catch the parade at the corner of 3rd Street, NW and E Street, NW.

Timing is subject to change. Call the Animal Walk Hot Line at 866.683.3670 or follow them on Twitter @DCAnimalWalk for arrival time updates.
Original post by Out by Ten. Thanks for reading!
Posted by Aimee @ Smiling Mama at 2:00 PM