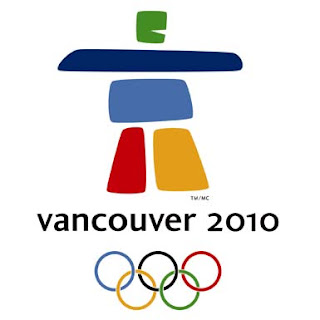 Did you know that Vancouver is suffering from a severe lack of snow? It's true! How about if we ship ours there? (That's not such a far-fetched idea--they really are flying and trucking snow in for the Winter Games which begin tonight!)

What better way to put a stop to cabin fever during Snowpocalypse 2010 than celebrating the 2010 Winter Olympics? Here are some fun ideas!

Make Gold Medal Cookies and an Olympic Torch (don't have gold foil on hand? Me either. Just shoot a little lower and make silver medals with aluminum foil!)

Check out these Olympic Craft Ideas

Meet the Vancouver 2010 mascots Miga, Quatchi and Sumi and check out games, activities, e-cards, crafts and more just for kids at this official Olympic site.

Now, if only digging our your car or dressing and undressing your kids in their cold weather gear were Olympic sports...my husband and I would have won multiple golds by now!

Original post by Out by Ten. Thanks for reading!
Posted by Aimee @ Smiling Mama at 8:00 AM